Background
This site was formerly occupied by 35 lock-up garages in two rows on the north and south sides of Blackthorn Grove. These were demolished some years ago.  The available ground is currently being used for access and parking by some residents in Blackthorn Grove and Ash Grove.  Two of the four houses in Blackthorn Grove use front garden space for parking and a third has a garage extension.

Proposal
The proposed housing is in two blocks. The southern block comprises two single-storey, one-bedroom (bungalow) houses, attached in a terrace to neighbouring upper and lower two-bedroom flats. The small block north of this comprises upper and lower one-bedroom flats. Parking provision for 12 cars and one space for a disabled user is proposed.  Access to rear gardens is direct for the ground floor houses and via pathways leading from front doors in the case of upper flats.
Residents at 7 and 9 Ash Grove appear to have pedestrian access to the ‘bungalow’ pathway system via personal gates. The gardens of the 2-flat block extend into the ownership of number 9 Blackthorn Avenue and a gate is again proposed, giving access from there to the pathway system and to Blackthorn Grove.  The plan requires the removal of three tall conifer trees which appear to be in the current garden space of 9 Blackthorn Avenue.
The following comments have also been informed by a consultation event where it was stated that the houses would be designed to meet the needs of older people through such features as grab rails or walk-in showers.  However, this information is not included in the Planning documentation and baths are shown in all the house plans.

Representations
Representations concerning this proposal were made to Lenzie Community Council at its April meeting by seven residents of Ash Grove and Blackthorn Grove, corresponding to four addresses in Ash Grove, one address in Blackthorn Grove and one unknown address.  The substance of these comments was that there is currently a lack of parking in the area, the proximity of Lenzie Meadow School had increased traffic/parking levels, parking problems were likely during the construction phase, street lighting might have an effect on the Moss environment and there is a possibility of flooding problems related to the Moss.  These residents were advised to make their representations individually to the Planning Department when the Planning Proposal would be published.

Other issues
Given that there is a well-documented shortage of housing for older people in the area, the proposed development is welcomed by Lenzie Community Council.  It is a quiet location, adjacent to Lenzie Moss Nature Reserve.  On the negative side, there are no convenient shops, nor is there a reasonably short, direct, all-weather walking route to major bus routes on Boghead Road or Kirkintilloch Road.  There is, however, a pedestrian path through from Blackthorn Avenue to Oak Drive where there is an SPT service to Lenzie Station and Kirkintilloch.  This route should be checked and improved if possible (there are steps at Oak Drive) to ensure that it is viable.  Extension to Boghead Road would also be good. It was noted that a single disabled user parking space is planned but, of all the designated parking spaces, it is the furthest away from the houses.  The layout of spaces might be considered further, to avoid this outcome.

Conclusion
Lenzie Community Council supports this application, but has pointed out some aspects that deserve attention to enhance the proposal in terms of housing for elderly people.

Description
This proposal seeks to convert the current main building of the former Primary School to accommodate 11 maisonettes and to add a new integrated building at the west end, which will accommodate 9 flats. The maisonettes are on two levels, corresponding to the current main floors of the school building and there are two levels within each maisonette ie including mezannine levels. A residents’ store is provided on the ground floor of the former east entrance, with one maisonette above. The flats in the new extension building are on three levels. There is a common entrance on the Fern Avenue side, incorporating stairs and a lift.

The south side of the building is given over to landscaped parking (37 spaces) and a new vehicle entrance will be created on Fern Avenue as shown below. Common amenity space is provided on the north side of the building. Note that the former janitor’s house, shown in outline, is not part of the scheme.

Design
The former Lenzie Primary School (and Academy) building is an important landmark in Lenzie and LCC supports this scheme, as it retains the building and improves the overall aspect by removing temporary constructions that have been added over the years. There is some ambiguity in the mix of housing, in that some units would qualify as ‘family homes’ (note also the provision of children’s play equipment) whereas the majority of the units are more suitable for couples or ‘downsizers’, for which there is a distinct lack of provision in Lenzie. As a result, the amenity space and the parking space proposed are limited relative to the family home requirement, but more than adequate for the smaller 2-bedroom units. There appears to be no outdoor drying space. However, these factors are essentially a consequence of the constraints of working in an existing building. Given the pressure on commuter parking, allocation of space and prevention of abuse needs to be addressed in the management plans.

It is good that the atrium is being retained and used in terms of gallery access. This feature could be developed to promote a sense of community in the housing.

The details of the bin storage proposals are not too clear but the space allocated seems inadequate to house the current EDC waste and recycling bin requirements for so many households.

Conclusions
Lenzie Community Council supports this proposal, but has made some comments concerning issues which might be considered. 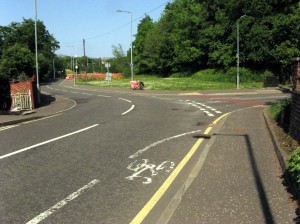 This Proposal was refused at a meeting of East Dunbartonshire Council on 25th June 2017.  The applicant appealed against refusal. The case was examined by the Reporter, who ruled against the Proposal on 1st April 2019.

Planning permission for this development has now been granted.

This message is only visible to admins.

This web site uses cookies. By continuing to use it you confirm you are happy with this.